I just read this warning: “Don’t overcharge your mobile phone. Make sure you unplug it from the charger after it reaches 100%. Don’t leave it charging overnight.”

It’s because your mobile phone charger doesn’t stop charging after your phone reaches 100% capacity. It keeps topping off the charge during the night. This is called a “trickle charge.” 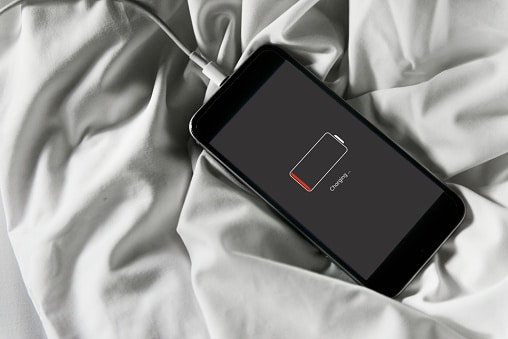 While you’re sleeping, and the phone is plugged in, it works to keep fully charged by compensating for the small amount of charge it loses by just being turned on. This is bad because the trickle charge causes your mobile phone to retain a higher ambient temperature than it should. This ultimately reduces the battery’s capacity.

I wondered why I couldn’t seem to keep my phone charged all day. It’s barely three-years-old, and I’m already having battery issues! Now I know why. I’ve been damaging the battery all this time by charging it at night while I sleep. I wish I had known this before!

Mobile phones contain a rechargeable lithium-ion (or Li-ion) battery that charges faster than traditional rechargeable batteries. So, when we plug our iPhone or Android into a charger, it can get fully charged in just about two hours.

By keeping our phones charged overnight we’re increasing the amount of time it spends on the charger, thereby degrading its battery capacity that much sooner.

Hatem Zeine, the founder of Ossia, a developer of wireless charging technology, tells us: “If you think about it, charging your phone while you’re sleeping results in the phone being on the charger for 3-4 months a year. So even though the manufacturers try their best to cover this scenario, this process inevitably lowers the capacity of your phone’s battery.”

Batteries decay from the moment you start using your new phone. This means they gradually lose their ability to hold a charge. By charging your phone overnight, you’re increasing the amount of time it spends with the charger. As a result, it degrades the capacity much sooner.

If you’re like me, you’re always on your phone checking text messages, emails, calling people, listening to music, watching videos, surfing the Web and more. It’s no wonder the battery runs down so quickly. However, if we’re careful about the way we recharge our phones, we can get much more life from the battery.

“Go ahead and charge to 100%. There’s no need to worry about overcharging as modern devices will terminate the charge correctly at the appropriate voltage…Modern smartphones are smart, meaning that they have built-in protection chips that will safeguard the phone from taking in more charge than what it should. Good quality chargers also have protection chips that prevent the charger from releasing more power than what’s needed. For example, when the battery reaches 100%, the protection hardware inside the phone will stop current from coming in, and the charger will turn off.”

However, they go on to say:

“Li-ion does not need to be fully charged as is the case with lead acid, nor is it desirable to do so. In fact, it is better not to fully charge because a high voltage stresses the battery.”

Don’t wait until your phone battery gets to 0% to charge it. A good time to charge it is when the battery reaches 35-45%. Doing this will help to preserve the battery life. If you do this religiously, then you should be able to keep your smartphone for longer than two years.

So essentially what I’ve learned is that rechargeable batteries are doomed to failure. They are constantly decaying from the moment you first turn on your brand-new phone and eventually lose their capacity to hold a charge. How depressing!

This is why my phone keeps losing its charge more quickly the longer I have it! I’ve owned my current iPhone 7 for over two years, and I’ve experienced a significant reduction in battery capacity.

Even worse, Apple tells us that constantly charging and recharging the iPhone battery isn’t good because the capacity of Li-ion batteries diminishes slightly with each charging cycle.

Most Android phones have a feature that allows for fast charging. They also have a chip with a Power Management IC (PMIC) that tells the charger when it’s receiving the higher-voltage fast charging to prevent it from overheating. Heat is a bad thing for all mobile phones. This is why you should never leave your phone in a hot car. The same goes for freezing temperatures.

So, what do the experts advise us to do? How should we charge our smartphones?

Here’s what the people at Cadex say to do:

Another tip: Take off your phone’s case before you charge it so it won’t overheat.

Well, I guess this is the reason why I never seem to keep a phone longer than two years. This, coupled with the fact that Apple keeps coming out with cool new phones entices me to replace my old one. I know–This can be an expensive proposition. Maybe this is what the phone companies planned for all along–To keep us buying new phones! And with the pay-by-the-month plans that providers now offer, they make it even easier to swap out our not-so-old phones for a new one.

But for those of you who want to keep your phones for longer than two years, charge your phone during the day after it reaches 35 to 40 percent and unplug it when it reaches 100%. This might get you more longevity from your Li-ion battery so you can hang onto your phone for another year or so.

Ready For A New IT Company For Your Business?

Keep On Top Of The Latest HappeningS In IT.

Tune Into The InfiNet Blog